Build yourself a Crumble Eggbot from junk 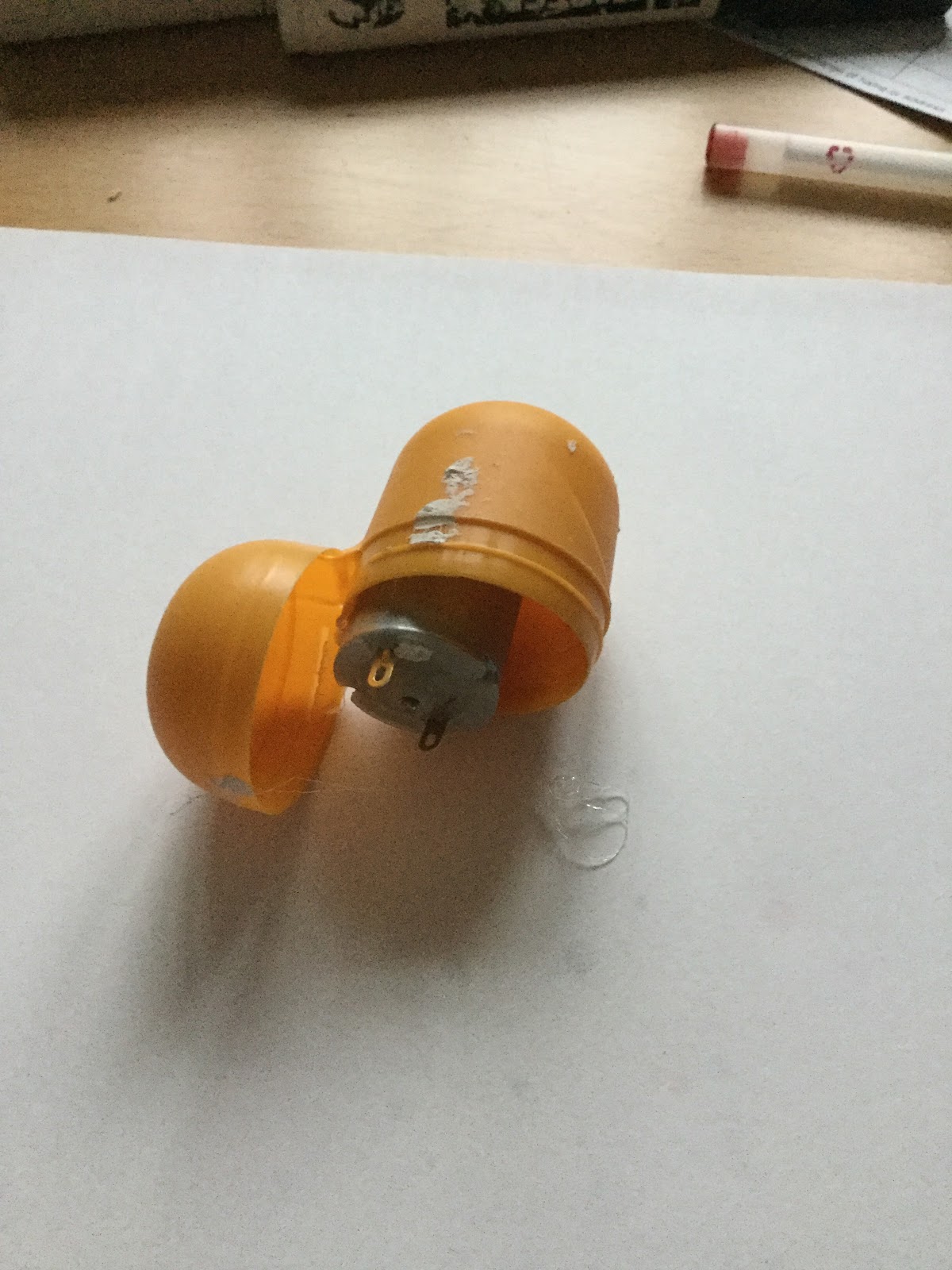 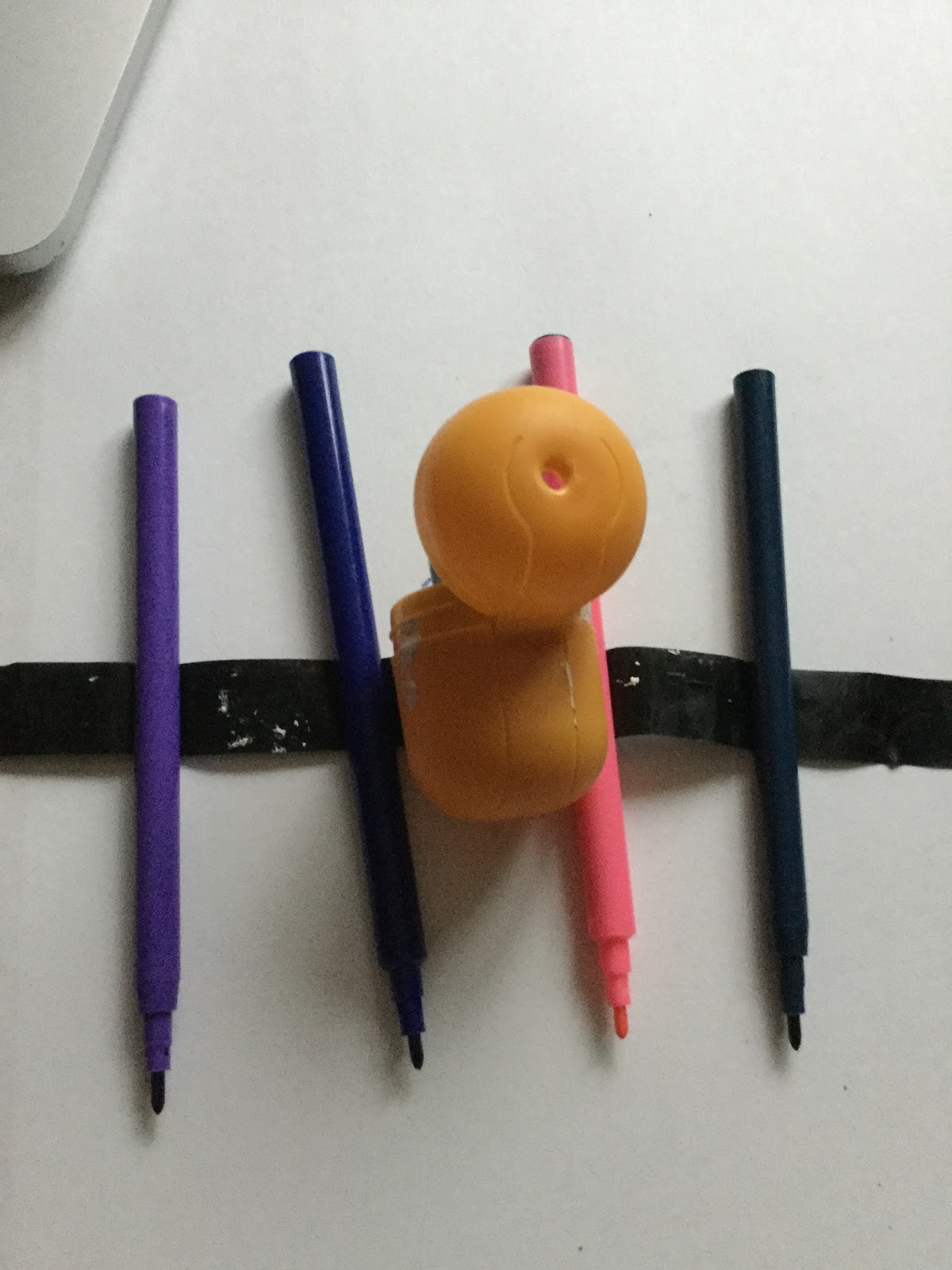 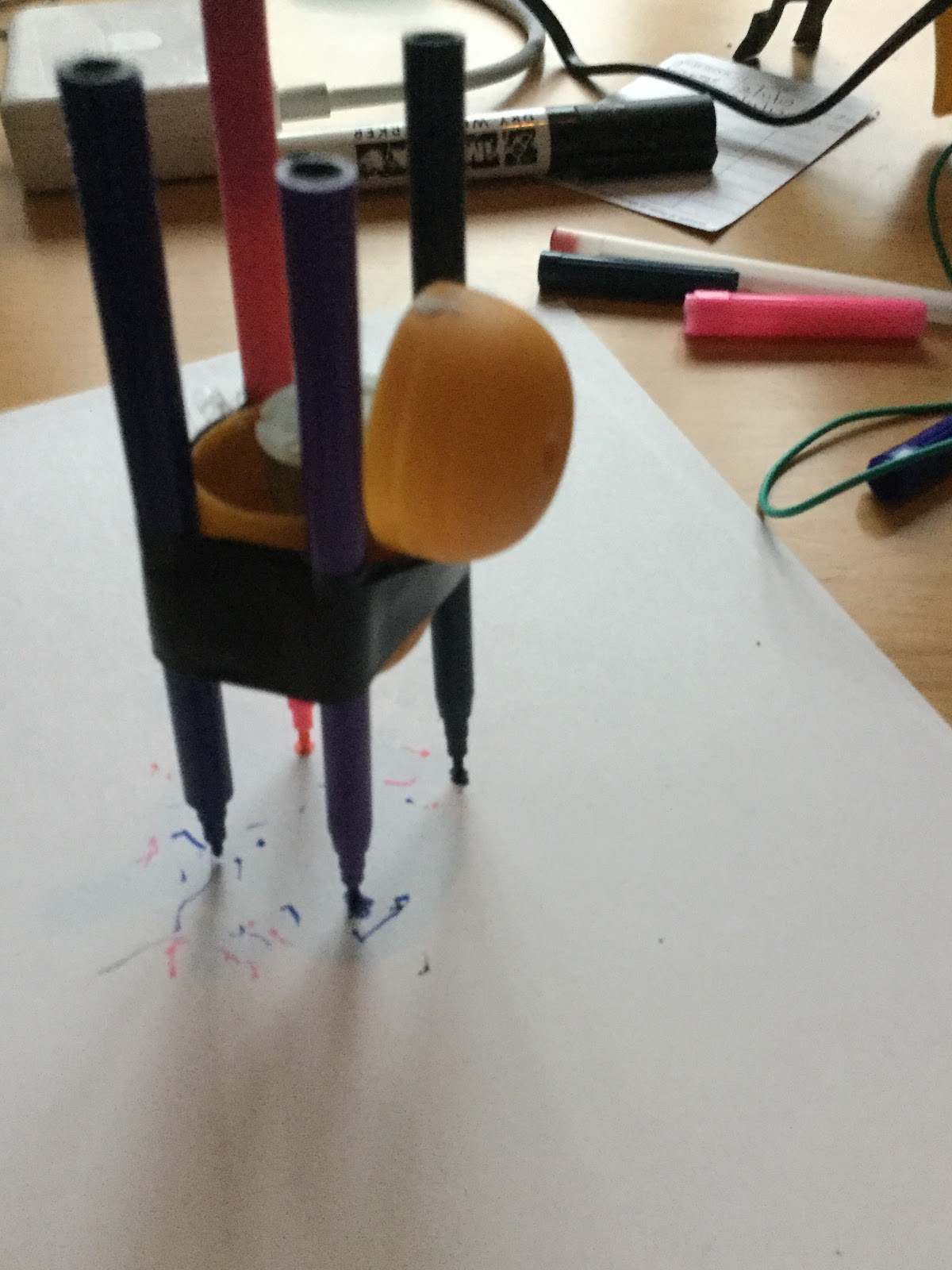 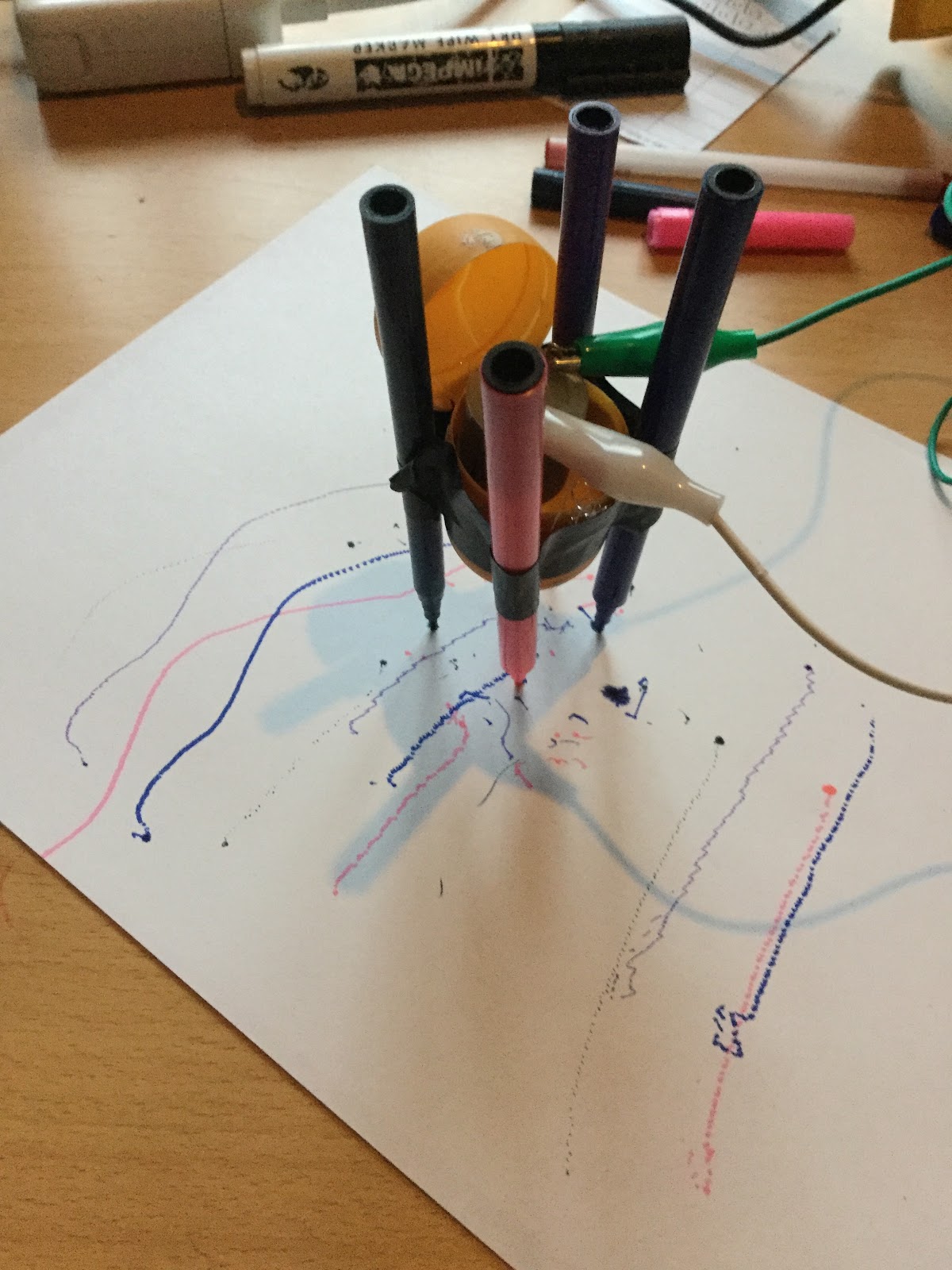 To see one in action go to: https://www.youtube.com/watch?v=NRlntdmdQRo 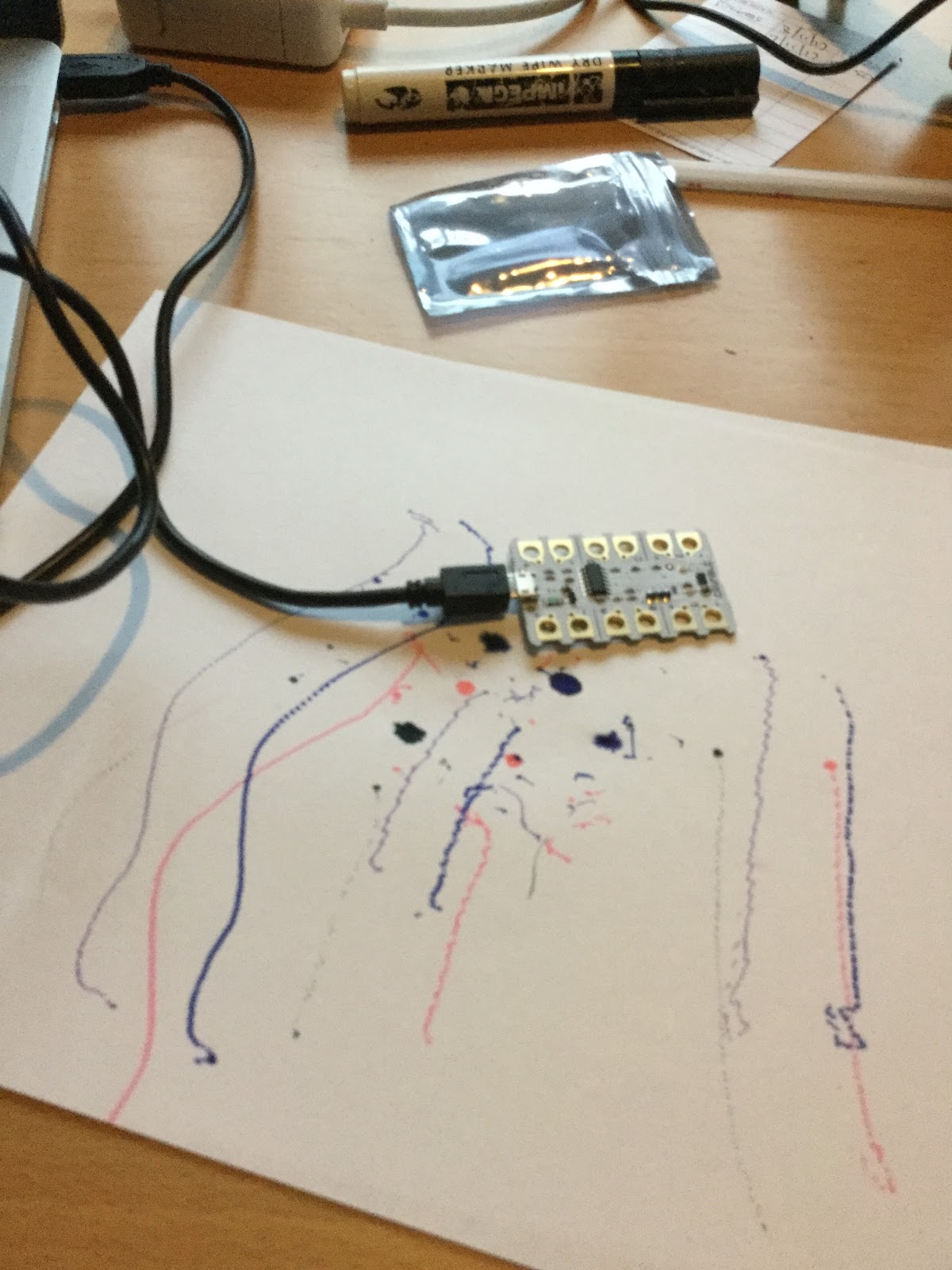 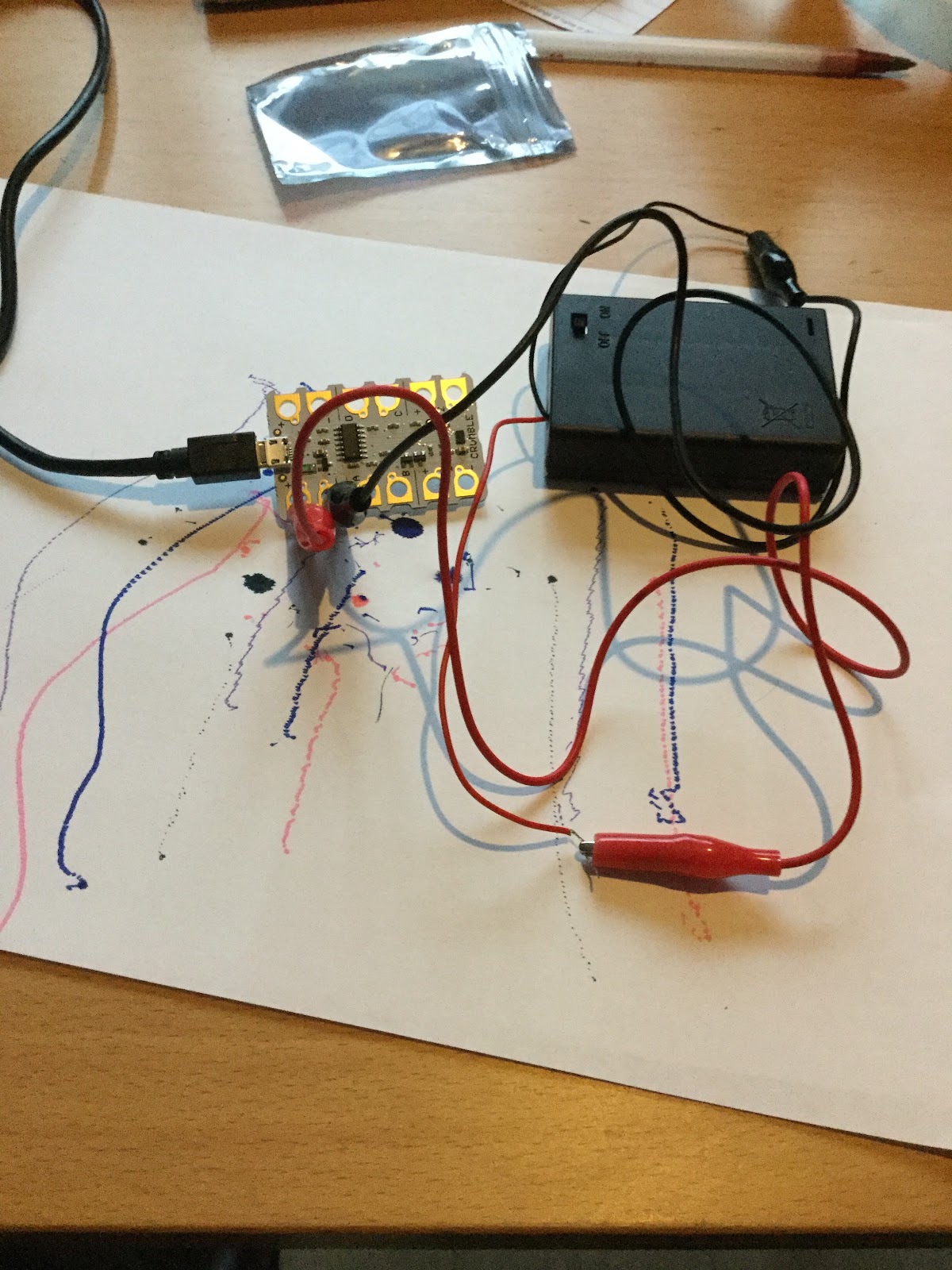 Stage 5: Connect the Egg!
On the Crumble, on the right-side there are two motor connections connect the Motor to these connections. Don’t worry about which of the motors wires is need you swap them around later. 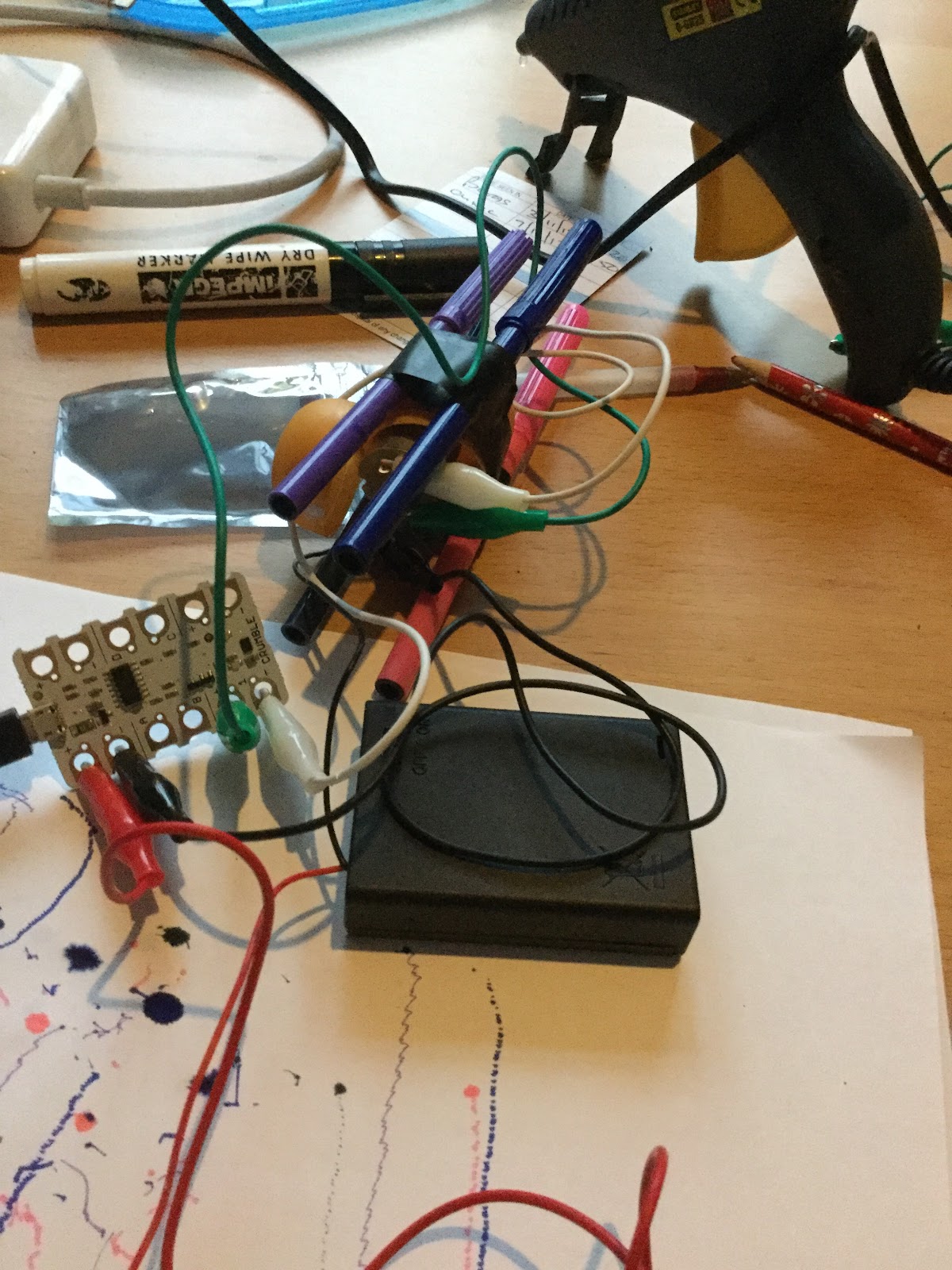 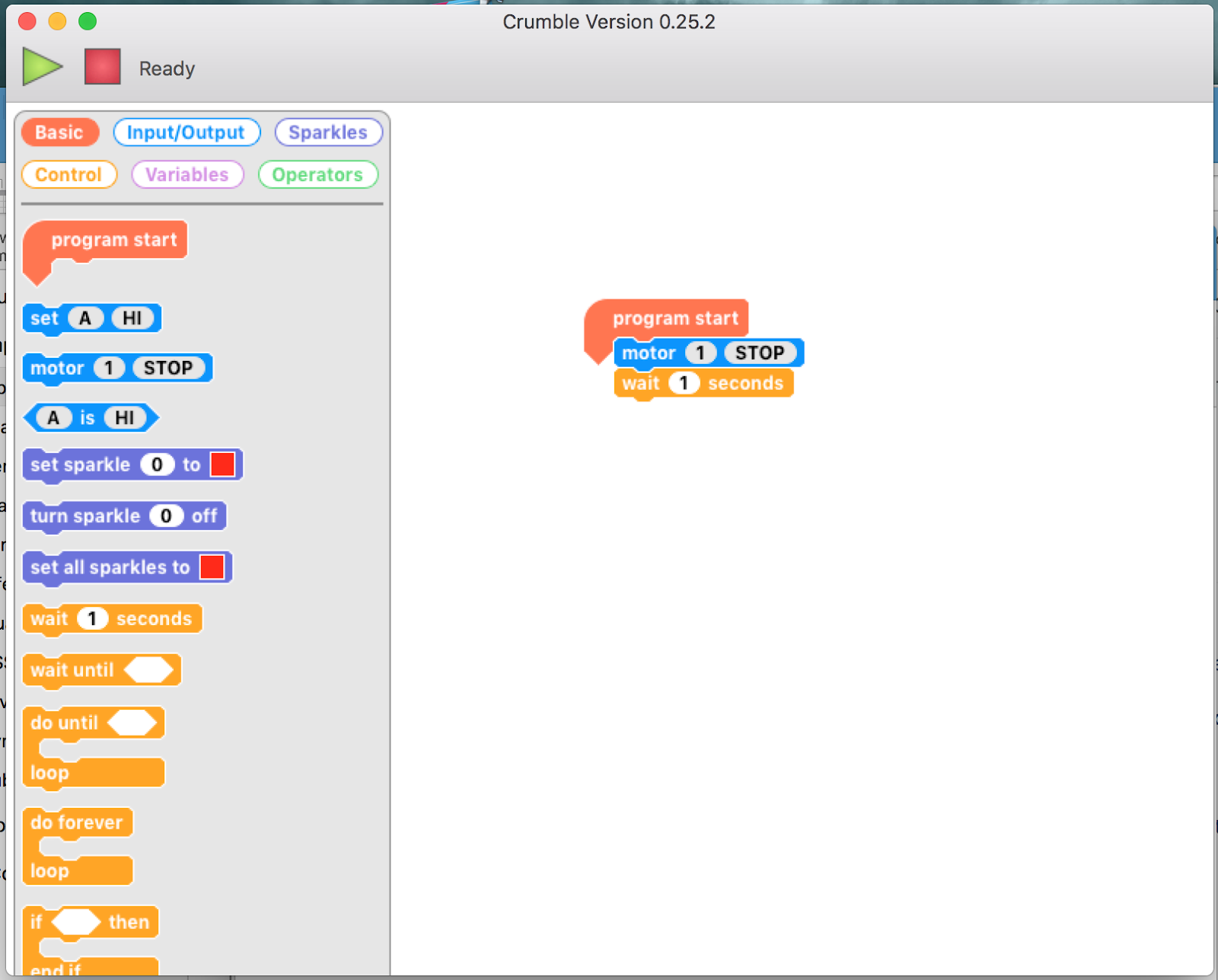 Stage 6: Programming it – Making the bot moves.
The software can be found at https://redfernelectronics.co.uk/crumble-software/ it includes how to set it up on your own machine.
Start the Crumble software. Drag from the left the Program start, motor, and wait blocks. Now join the up start block at the top and the motor block next and the wait block last.
Your code should look like this. 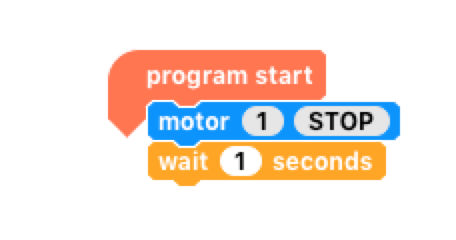 Click on the stop within the motor block. It should change to forward. Now you are ready to make it move. Press the green arrow and with the battery pack on, it should (hopefully) keep moving. 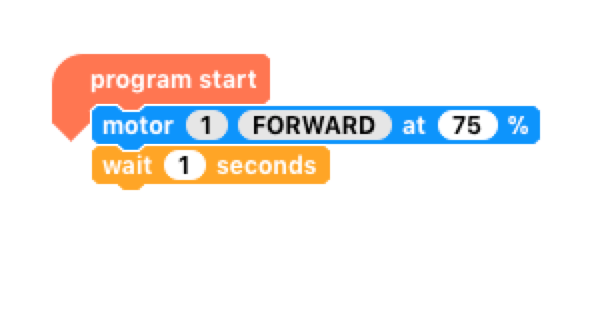 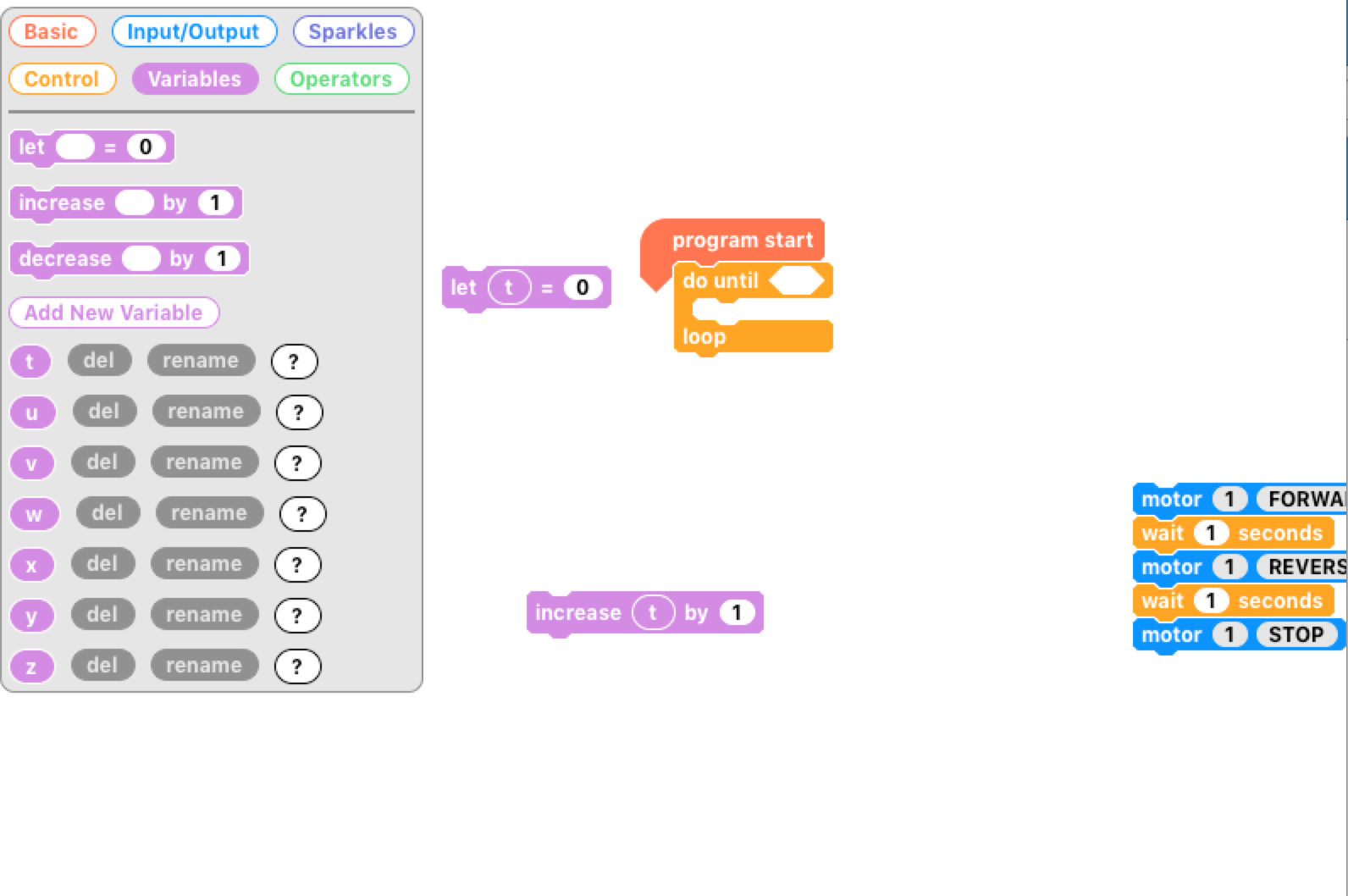 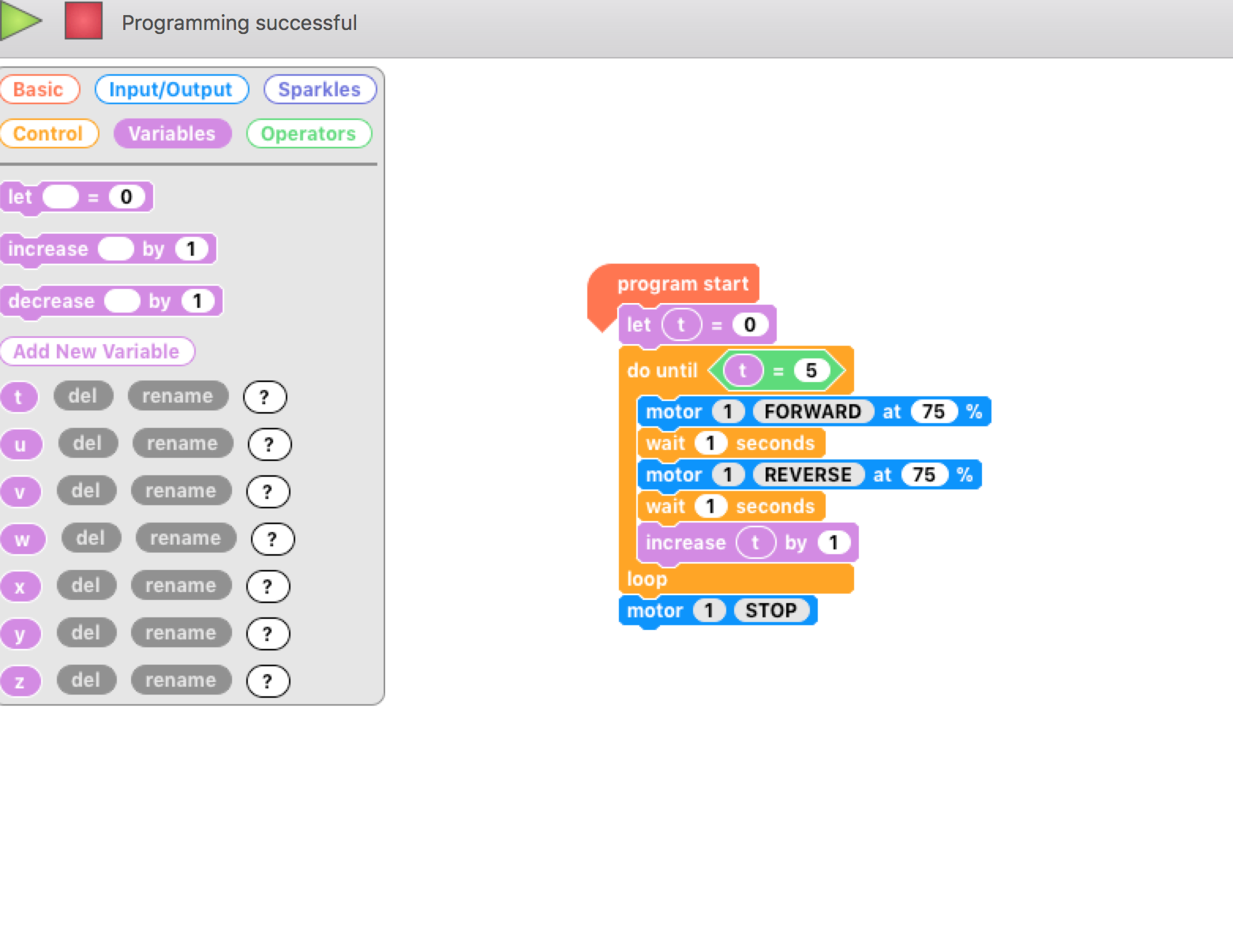 Now for the challenge put all these together to copy what is shown below. Now, but the egg-bot on the paper, with the pen lids off, press the green triangle and the motors should be spun in different directions.
This is a junkbot so it may just cause the bot to move a slightly different directions but hopefully it should just draw some squiggly lines.


All opinions in this blog are the Author's and should not in any way be seen as reflecting the views of any organisation the Author has any association with. Twitter @scottturneruon

The Junkbots project has been running for a number of years as an initiative to bring sustainability, computing and engineering together by building bots out of junk  details of the project can be found at.  https://junkbots.blogspot.com/.  Junkbot is an extension of the Research into teaching problem-solving going on at the University of Northampton please feel to visit https://computingnorthampton.blogspot.com/2019/01/problem-solving-research-outputs-and.html for more details.


One of the criticism of the robot programming part of the Junkbots project is not everyone necessarily gets a go at the programming. To address this a new feature has been added to the project, using Scratch to play with the ideas. This is the first of a set exercises to play with these ideas. The cleaning robot shown is loosely based on the LEGO Mindstorms RCX.

The commands all in the My Blocks section

Exercise 1: Moving the Robot Cleaner around.: 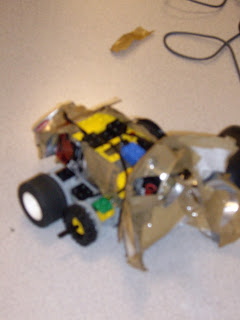 Confession time, this has been a research interest for me, along with a number of colleagues, since around 2005. It started with undergraduate students - investigating teaching and developing problem solving skills as a first step in developing programming skills through the use of LEGO-based robots and graphics based programming for undergraduate students. The main vehicle then for developing the problem-solving skills was the LEGO RCX Mindstorms robotics kits and series of gradually more challenging robot-based tasks.


Lawhead et al (2003) stated that robots “…provide entry level programming students with a physical model to visually demonstrate concepts” and “the most important benefit of using robots in teaching introductory courses is the focus provided on learning language independent, persistent truths about programming and programming techniques. Robots readily illustrate the idea of computation as interaction”. Synergies can be made with our work and those one on pre-object pro…